The birth and history of the Leadership Wisconsin Program is a classic case of vision and collaboration. It is also a great example of building on the experience of others and improving on it. In 1980 Stephen Smith (UW-Madison), Roger Swanson (UW-River Falls), and Laura Beane (agricultural leader from Jefferson county) attended an informational meeting about W.K.Kellogg-sponsored leadership programs in Michigan, Washington, Montana, California, and Pennsylvania.

On January 9, 1981, the Agricultural and Natural Resource Consortium of the University of Wisconsin System approved preparation of a draft proposal to initiate a rural leadership development program in Wisconsin. UW-Extension was asked to administer and coordinate the project. During 1982 and 1983, key leaders met to determine support for the proposal. In May 1983, with the approval of a provisional board of directors, the director of then Cooperative Extension submitted a proposal to the W.K. Kellogg Foundation, which subsequently funded the project. In September 1983, the Board of Directors was officially organized. They approved the university’s curriculum proposal and a fund raising strategy, which officially launched the program. Wisconsin Rural Leadership Program (WRLP) Group I was selected in April 1984 and completed the series of eleven seminars in March 1986.

In 2008, twenty-four years after Group I started the WRLP experience, the Board of Directors initiated an in-depth evaluation process. It included gathering feedback from fellows (program participants), alumni, local and national specialists in leadership training, and community members who witnessed the impact of alumni in Wisconsin’s communities. The feedback confirmed that WRLP had a significant, positive impact on participants. Alumni reported developing new leadership skills and abilities as a direct result of their program experience. We also learned that alumni went on to play active leadership roles benefiting their respective communities, organizations and businesses, and our state as a whole.

At that time the Board of Directors and Cooperative Extension recommitted to their joint mission of Developing Leaders to Strengthen Communities, celebrated the success of the prior years, and recognized that leadership requires us to look to the future. They committed to intentionally work to preserve and continuously improve the program; expand the number of community leaders in Wisconsin; foster increased sharing, networking, and collaboration among alumni; and enhance training and support. With this in mind, WRLP re-branded as Leadership Wisconsin, enabling the program to be better positioned to fill the critical and growing need for quality, integrated leadership development training for leaders throughout all of Wisconsin.

Ten years after the programs name changed to Leadership Wisconsin, Extension and the Board of Directors recognized that the landscape had changed. Largely thanks to the work of Leadership Wisconsin Program partners and alumni, local leadership programs had been created throughout Wisconsin. These programs offered leaders affordable, community-specific development opportunities lasting 6-9 months. The Leadership Wisconsin Program model had become dated, what leaders wanted had changed. The 2-year time commitment and $7,5000 tuition were no longer accessible or appealing to prospective participants and their employers.

The Board of Directors and Extension acknowledged that the Leadership Wisconsin Program model has been disrupted and become outdated. They agreed to pivot towards a new model that would reach a larger number of leaders; would be focused and flexible; and would allow for innovation and collaboration. 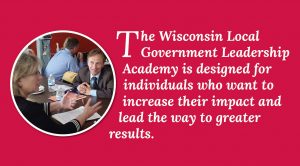 In 2019 the Leadership Wisconsin Program launched a new leadership development opportunity – the Wisconsin Local Government Leadership Academy. Designed for individuals in local government who want to increase their impact and lead the way to greater results, the Academy is offered in partnership with the Wisconsin Counties Association (WCA). Intended to build upon the education and resources Wisconsin’s local government leaders already have access to, the Academy focuses on the nuanced skills of being an effective leader.