City of Split is almost 17 centuries old. It dates from the time the Roman Emperor Diocletian who built his palace on the peninsula near Romany City Salona (today Solin). During the last 1700 years, Diocletian’s palace turned into a city with its history, beauty and natural and cultural heritage.

“Diocletian Palace and the entire historical core of Split have been on the World Heritage UNESCO list ever since 1979, and not only for the extraordinary preservation of the Palace but also because the Palace and its city (or the city and its Palace, if you like) continue to live a full life. All historical layers from the old Rome, middle ages till today are still visible and alive in this structure. A walk through the ancient city takes you through time, along with the great examples of ancient architecture like Peristyle, the middle-aged Romanesque Church and Gothic Palace, Renaissance portals of the noblemen’s houses, Baroque facades and modern architecture superbly merged in the rich heritage.”  (www.visitsplit.com)

Today Split has almost 180.000 inhabitants and is a second largest city in Croatia after Zagreb. Locals drink their coffee and eat in the same cafes and restaurants as a tourist and this gives tourist (and you in only a few weeks) impression that they became locals, and this is what is called “splitski đir” (again one world for testing you on arrival to Croatia 😊). When you walk on green and fish market which is an important part of every family in Split and found the social life of the city which is reflected on Riva (waterfront) you will meet Split’s soul and heart.

Split is not only glamorous for the architecture. It is also a place for a great vine and gourmet experience – and if you were following me until now I am always writing about food and drinks and Tim was also 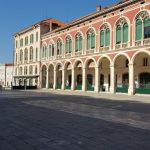 writing about food and drink you will experience during your visit to Croatia.😊. City of Split is famous for the sportsmen in more than several sports – basketball – Dino Rađa (Boston Celtics) & Toni Kukoč (Chicago Bulls), tennis – Goran Ivanišević, football – Hajduk Split, … It is also a home of a dozen Olympic medal winners.

Split has also its hill and it is a symbol of the city. Marjan hill offers jogging trails, biking, and mount climbing but also ancient churches. Split has numerous beaches (the most famous beach is Bačvice where you can see people swim almost during whole year) and clean sea.

Regarding the economy, in Yugoslav era Split was an important economic center with a diverse economic and industrial base which included shipbuilding, chemical, plastic, food, and paper industry. In that time Split’s GDP per capita was significantly above the country’s average. Most of those factories are not working today or they are working with significantly fewer employees. As it is the case in rest of Croatia, new companies are growing while the old ones which are not capable of keeping up with competition are going away. Today, the city’s economy relies mostly on trade and tourism with some old industries undergoing a partial revival, such as food (fishing, olive, wine production), paper, concrete and chemicals

During your visit to Split, you will visit Brodosplit – the largest shipyard in Croatia which was privatized a few years ago and now is a member of DIV group. The company employs around 2.000 employees and has built more than 300 ships and other vessels including tankers, both panamax, and non-panamax, as well as container ships, bulk carriers, dredgers, off-shore platforms, frigates, submarines, patrol boats and passenger ships. More than 80% of those ships were exported to foreign contractors.

What can I say more than I hope you will enjoy Split as much as we Croatians do 😊.