On the road again … 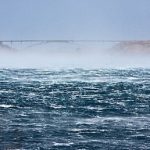 And here we go again into the bus and let’s hit the road. Today we are driving toward Split and Dalmatia. You will see a lot of coasts but also some magnificent sights of inland while driving on our Dalmatina highway. Today is also your R&R day and you will be visiting one of the most beautiful National parks in Croatia – Krka. (P.S. First test when you land in Zagreb will be to hear how you pronounce the name of the park 😊 and I will have special reward for the winner.)

As it is in your program for this day you will hear something about what is ahead of you and that is Dalmatia (Croatian Dalmacija) with Split and Dubrovnik. During your ride, you will be going over the bridge Maslenica which is often closed due to the heavy winds (bura and jugo) with speeds of from 180 to 300 km/h (110 to 190 miles/hour). 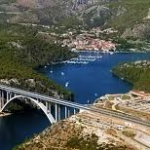 And by the time bus talk and discussion ends you will be almost in Skradin (view from the highway Dalmatina). This small Mediterranean town, with its charming narrow paved streets and passages, rich history, stunning scenery, and quality cuisine and wine. “The surroundings of Skradin have been inhabited since the Neolithic period – the oldest settlement dates from the year 3500 B.C. The first data about the town of Skradin dates from the year 33 B.C.” (www.skradin.hr) It is one of the oldest Croatian towns which has begun writing its history since the time of the Illyrians. It received its name during the Roman rule – Scardona. The entire town core represents a protected cultural monument with narrow paved streets, passages, valutas and stairs. Three most important things to see are: i) medieval fortress of Turina from 13th century constructed by Pavao Šubić; ii) Baroque Catholic Church of the Blessed Virgin Mary from 18th century with very valuable musical instrument – pipe organ which is part of the national cultural heritage; iii) tower clock (campanile) from 19th century which was built on the nearest cliff instead of beside the church (as customary) due to its weight. Fourth thing is if you have time is wine tasting at Bibich Winery (http://bibich.net/) which is one of the premium Croatian wineries (and NO I am not getting paid by them for promotion 😊). Possible places for lunch are restaurants “Zlatne školjke”, “Bak”, “Barbara”, as well as the taverns “Prstaci”, “Dalmatino” and “Bonaca” or ask your seminar co-chairs. Who knows maybe you will see Bill Gates there as he is often visiting Skradin as it is his favorite vacation place (according to the Forbes magazine). 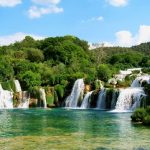 And next is the highlight of the day (according to yours truly) – visit to National park Krka. Krka National Park lies within Šibenik-Knin County and covers a total area of 109 km² of the loveliest sections of the Krka River, and the lower course of the Čikola River. The national park is a vast and primarily unaltered area of exceptional natural value, including one or more preserved or insignificantly altered ecosystems. To visit the park, you will take the small paths and wooden pontoons that go along the river, giving you a beautiful view on the waterfalls throughout the visit. There is only one way to go so you will not get lost. Count about one hour to visit the park, plus the time you will need to take pictures. The main attraction of the park, Slapovi Krke, is a series of waterfalls, the biggest of which, Skradinski buk, was named after Skradin. The Skradinski buk waterfall, the longest waterfall on the Krka River, is one of the best known natural beauties of Croatia. The cascades are composed of travertine barriers, islands, and lakes. From there you will see the remains of the hydroelectric power station that was built and put into operation in 1895, only 2 days after the one created by Nikola Tesla on Niagara Falls! This invention gave to Šibenik the opportunity to receive electrical light long before other European cities like Vienna, Rome or London.

Time is counting and now we are within last 30 days before you make touch down at Zagreb airport.