Let’s go with blog No. 3 and talk (write) about Zagreb. Zagreb is the Croatian capital, largest city (with circa 850.000 inhabitants), the center of political, economic and basically any power. There is a saying – if you are not present in Zagreb then you are not in Croatia. And that is unfortunate for everyone else not living here.

I will start with tourist information since you will be in Zagreb for two days. In the last few years, Zagreb has been heavily investing in attracting tourists to come and visit although is not at the sea-side. But this is no problem. As you will see, it takes only 1,5 hours to get there by car. Rijeka is 150 km from Zagreb, and with highways, it is possible for someone in Zagreb to go for an afternoon coffee at the seaside.

The first written record of Zagreb dates to 1094 when the Hungarian king Ladislav established the Kaptol diocese on his way to the Adriatic Sea. (www.infozagreb.hr) In 1242 Béla gave Gradec a charter proclaiming it a free royal city. His generosity is symbolically reenacted every day by the blasting of the cannon at noon from the Lotrščak tower overlooking central Zagreb. There is also a legend of how the city was named. According to this legend on one sunny day, a brave governor asked a girl named Manda to ladle (zagrabiti) him out water from the spring. This spring became Manduševac and the city became Zagreb. I do hope you remember from my first blog that Osijek was more developed than Zagreb at the end of 19th century. The development of industrial production, commerce, transport, and banking during the second half of the 19th century made their mark on the Zagreb’s appearance and made it the biggest city in Croatia. 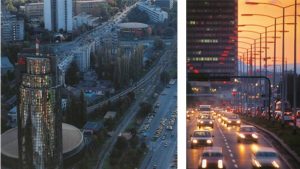 Today’s Zagreb is the business center of the region, a place for multilingual business communication, political debate, and cultural exchange. The Parliament of Croatia and the Government have their seat in the Upper Town. And when walking around the city you will notice that every major brand is here and you can experience traffic jams all day.

During your stay in Zagreb, you will visit the Croatian parliament where you will find out more about the Croatian political system and how politics are run here – probably not a lot different than in the USA. We also have two big parties – HDZ (Croatia Democratic Union) and SDP (Social Democratic Party). Besides them, we have several smaller parties with big influence. If they are members of the political majority than they have the influence of keeping majority 😊.

Zagreb is also full of green areas where you can walk and enjoy nature – in Maksimir, Zoo, Medvednica, Sljeme. Sljeme is famous for the international skiing competition (Ice Queen) and last year there was an event where people could ski in the city center.

Zagreb is the cultural center of Croatia with more than 30 theaters. You will visit the main theater – the Croatian National Theater where you will enjoy the ballet Peter Pan. There are also numerous museums (among them the Museum of Broken Relationships, a huge Nikola Tesla exhibition, …), dance and music festivals.

You will also be able to experience so-called “Lounge Culture”. As it is defined at infozagreb.hr in the moment the sun appears in the sky in spring, restaurant, café and coffeehouse terraces open for custom. Streets become promenades, places to get a cup of coffee, relax or have a business meeting.

You can find more about Zagreb at www.infozagreb.hr

This is all for now folks. I will try to send more information about our political system and health policies in the next blog.