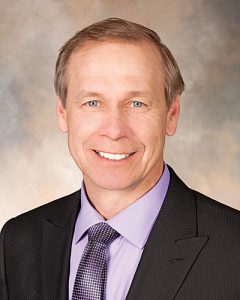 MADISON, Wis. – Leadership Wisconsin presented the organization’s 2016 Outstanding Alumni Award to Jim Holte of Elk Mound on July 16th at the Legacy of Leadership Celebration in Wausau. Dedicated to developing leaders to strengthen communities, Leadership Wisconsin is a unique private/public partnership affiliated with the University of Wisconsin Extension. During Leadership Wisconsin’s 2-Year Signature Program participants enhance their leadership skills; broaden their understanding of local, state and national issues; and expand their networks in order to engage people in creating positive change for Wisconsin. The Outstanding Alumni Award is presented to an individual who’s professional and volunteer efforts have improved the lives of their fellow citizens, who serves as a role model for other leaders, and who looks after the best interests of their community.

The 2016 Outstanding Alumni Award was given to Jim Holte. Holte is a graduate of Leadership Wisconsin’s Group VI.  Jeanne Carpenter, Group XII Alumna and Executive Director of Wisconsin Cheese Originals, presented Jim with the award.  Jeanne was the 2014 Outstanding Alumni recipient.  In her remarks Jeanne said, “Jim Holte knows that part of being a leader is having the ability to make decisions”.  One of his first leadership decisions was becoming involved in his county’s Farm B
ureau Young Farmer program which eventually led to his current role as President of the Wisconsin Farm Bureau Federation.  He is also a member of the American Farm Bureau Federation Board of Directors (the nation’s largest farm organization), and President of Rural Mutual Insurance Company.
Jim’s roots run deep in the area south of Elk Mound in Dunn County where his great-grandfather settled from Norway in 1884.  In the 1990’s he was faced with a big decision regarding his dairy herd and converted the farm to cash grain and beef cattle.  With a strong understanding of today’s agriculture, Jim has helped bring awareness of the challenges farmers face on their farms to state and national legislator’s attention.  He has helped keep farmers in business by promoting Use Value Assessment which helps lower property taxes on agriculture land so farmers do not go out of business. Jim has also helped farmers keep farming by promoting the ‘Right to Farm Act’ which allows farmers who are abiding by environmental standards to keep farming if they are complying with all state regulations.

In addition to his agricultural advocacy and leadership, Jim has served on the school board for Elk Mound, and multiple terms on the Leadership Wisconsin Board of Directors.  He is a chief advocate for helping Leadership Wisconsin recruit leaders from the agriculture community.  Along with Group V Alum Gary Kirking, Jim helped to pave the way for Group XVI’s recent international seminar to Kazakhstan.

Holte was nominated for the Outstanding Alumni Award by Becky Hurley.  Becky is one of many young agricultural entrepreneurs who have been inspired and encouraged by Jim.  A graduate of Group XVI, Becky owns Hurley Realty in Evansville.  She said Jim deserved this award because “He is an example of how a leader should be. He engages in his community, engages with employees, engages with members and leads by example. He has compassion for all those around him.”   Carpenter added that “Despite all of his accomplishments, Jim Holte remains one of the most humble, quietest men in a room.  But when Jim speaks, people listen.  They respect his experience, his expertise and his decision-making”.

Leadership Wisconsin is proud to recognize Jim Holte’s contributions to the organization and the community.

Connect with your County Extension Office

Find an Extension employee in our staff directory