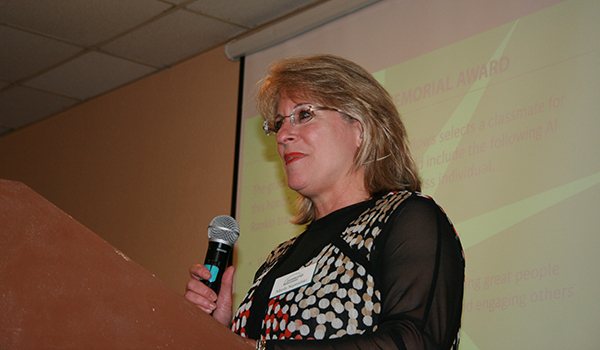 Leadership Wisconsin presented the organization’s Inaugural Alva Rankin Memorial Award to Marla Sepnafski of Mosinee on July 19th at the Legacy of Leadership Celebration in Plover.  The award, created in memory of program Alumnus Alva Rankin, is meant to recognize a recent graduate of the program who embodies the memory of Rankin’s leadership.  Sparta resident Gary Kirking describes his former Group V classmate as, “a World Class individual.  Alva had vision and at the same time was solutions-oriented.  I would describe him as a learning machine who had great people skills, made others feel valued, and always had time to listen to and engage people around him.”  Rankin, who lived in Lake Nebagamon, was known for his work on the board of Catholic Charities, for being inducted into his industry Hall of Fame, as a foster parent and a championship level handball player.

Kirking, along with classmate Scot Wall of Cashton decided that they wanted to honor Al as part of their group’s 20th anniversary of graduating from what was then called the Wisconsin Rural Leadership Program.  They contacted their classmates to assist in developing the Alva Rankin Memorial Fund.   The fund will be used for the Alva Rankin Memorial Award given every other year to a member of the graduating class of Leadership Wisconsin.  Award winners are selected by their peers in the program.  This year’s winner, Marla Sepnafski, is the Director of the Wisconsin Valley Library Service, a seven-county public library system.  The award was presented to her by Alva Rankin’s wife Anne and son Damen.  “Al thoroughly enjoyed his experience in the leadership program, the benefits of being in the program, the new friends he made, and the people he met”, added Anne in her remarks at the award dinner.  As part of the award, Sepnafski received $100 to donate to a community project, leadership project, or entity that contributes to the community good.  She has chosen to use her money toward Kids Voting USA of Marathon County, a nonpartisan, not-for-profit organization that collaborates with schools and election officials to promote civic education and citizenship among K-12 students.

“We thought that using the Memorial Fund to give leaders resources to support their communities was the best way to honor Al’s leadership” said Wall.  Wall and the Bank of Cashton matched the first $1,000 raised in the growing fund.  Anyone interested in donating to the Alva Rankin Memorial Fund can send a check made out to Leadership Wisconsin with “Alva Rankin Memorial Fund” in the memo line to Leadership Wisconsin, 610 Langdon Street, Room 331, Madison, WI 53703.  Questions about the fund can be directed to Program Coordinator Kim Clist at 608-263-0817.