Leadership Wisconsin will present the organization’s 2014 Outstanding Alumni Award to Jeanne Carpenter of Oregon on July 19th at the Legacy of Leadership Celebration in Plover.  Dedicated to developing leaders to strengthen communities, Leadership Wisconsin is a unique private/public partnership affiliated with the University of Wisconsin-Extension.  During Leadership Wisconsin’s 2-Year Signature Program participants enhance their leadership skills; broaden their understanding of local, state and national issues; and expand their networks in order to engage people in creating positive change for Wisconsin.  The Outstanding Alumni Award is presented to an individual who’s professional and volunteer efforts have improved the lives of their fellow citizens, who serves as a role model for other leaders, and who looks after the best interests of their community.

Jeanne Carpenter is a graduate of Leadership Wisconsin Group 12.  She currently serves as Village of Oregon Board Trustee, with aspirations for additional service as an elected official.  In 2009 Carpenter founded Wisconsin Cheese Originals, a not-for-profit organization dedicated to sharing information about Wisconsin specialty cheese.  She also founded a sister organization for cheesemakers, the Wisconsin Artisan Cheese Guild.

According to Wisconsin – Specialty Cheese, a May 13, 2013 USDA-National Agricultural Statistics Service report, “at 611 million pounds, specialty cheese accounted for 22 percent of Wisconsin’s total cheese production.  This was an increase of 36.3 million pounds over 2011.”    Through Cheese Originals, Carpenter does everything from teaching cheese classes to leading tours of European cheesemakers to offering a scholarship that helps new Wisconsin artisans earn their cheesemaker’s license.  Carpenter has also organized the Wisconsin Cheese Festival which ran for five years and included seminars, tours, private dinners with cheesemakers, a market, and a popular “Meet the Cheesemaker” gala at Monona Terrace in Madison.  Jennifer Ondrejka, fellow Group XII aluma and current member of the Leadership Wisconsin Board of Directors, explains that “No single person can be credited with this success, but it is clear that Jeanne Carpenter has played a major role.  Cheesemakers, cheesemongers, and others who work in the industry say Jeanne provides tremendous support to them.” In January, 2014, Jeanne was honored as Business Person of the Year by the Oregon Area Chamber of Commerce to recognize her success in business and her many contributions to the community. 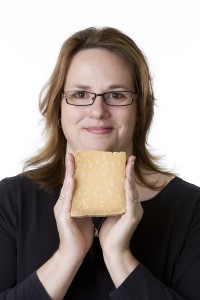 Carpenter constantly challenges herself.  She is well on her way to becoming an American Cheese Society Certified Cheese Professional.  Her leadership goes beyond educating about and supporting the specialty cheese industry.  From 2008 to 2013she served on the Leadership Wisconsin Board of Directors in order to support leadership growth in others.  As President of the Leadership Wisconsin Board of Directors, Carpenter led the organization during a time of transition that included hiring a replacement for the organization’s Executive Director of 12 years and setting strategic direction for the future.  She was at the forefront of helping Leadership Wisconsin broaden and deepen its impact across Wisconsin, including  making the signature program more relevant to a diverse pool of leaders across the State.

According to Ondrejka, “Jeanne is a wonderful role model.  Despite her creativity, drive and energy, she is remarkably self-effacing.”  A self-described “’Cheese geek who was raised on Velveeta’”, she completely downplays her role in the growth of Wisconsin’s specialty cheese industry.  Jeanne is a woman of her word.  She lives by her motto:  “’Have Fun.  Do Good.  Eat Cheese.’”